Sins of Our Masonic Fathers: The lost strength of fewness in American Freemasonry 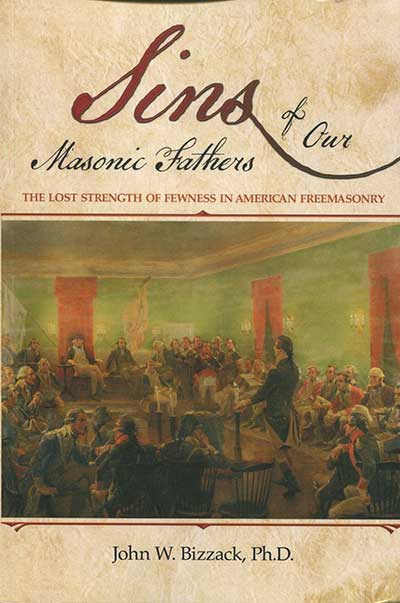 “Sins of Our Masonic Fathers: The lost strength of fewness in American Freemasonry”, by John W. Bizzack, PhD. Reviewed by Cathy Giaimo, Librarian, The Masonic Library and Museum of Pennsylvania.

“Sins of Our Masonic Fathers” by Brother John W. Bizzack is an examination of the history of American Freemasonry and its effect on membership. Brother Bizzack makes the point throughout the book that the focus on membership expansion has not benefited the men joining the Fraternity. This is not a recent problem but has been an issue almost since Freemasonry came to this country. There is a need to look at the past “sins” or unintended consequences of our Masonic forefathers and their effect on American Freemasonry today.

The book makes the claim that after American Grand Lodges declared their independence from the Provincial Grand Lodges of the British Isles, the enthusiasm for the Fraternity took off unchecked with the formation of lodges and expansion of membership across the newly-formed country. More men joined the Fraternity, but there was very little time for instruction in what Freemasonry actually stood for. This has resulted in ill-informed membership, traditions that have not benefitted Freemasonry as a whole and the lack of good leadership at the lodge level, or unfortunately, at the Grand Lodge level in the 21st Century.

The American ideal of “bigger is better” has not worked for American Freemasonry according to the author. The Fraternity has sacrificed what were once exclusive qualifications to a more casual and relaxed standard of membership — to its detriment. The decline of its membership may not be too bad a thing if, in its loss, American Freemasonry finds its true meaning.

Brother Bizzack challenges assumptions about what they think they know about Freemasonry and how things have gotten to this point. You may or may not agree with all or anything that he has written, but he will give you something to think about.

If you wish to borrow this book or any other found in the Library, just visit https://pamasonictemple.org/library/. You may also contact us at 1-800-462-0430 ext. 1933 if you have any questions.